“Grass is my crop,” Roy Smith says, smiling. “Grass is California’s one ‘default crop’: it grows without intervention and feeds all life forms. We need ways to convert that default crop into a feed source for everyone else.” A diverse group of grass-grazing animals – pigs, geese, and sheep – is key to Roy’s 7.5-acre land restoration operation in Cotati, California. “Every animal must contribute to the land,” he adds. “That is their primary role.”

Roy’s place is a long, narrow ribbon of golden grass, green forested clusters, swales, and century-old chicken-farm buildings that runs from a house and handful of pigs in the front pasture, to the sheep and railroad track boundary in back. It is already hot at 9 AM this summer day, in the low 80s. Empty commuter trains roll past a half-dozen Dorper sheep, clustered beneath eucalyptus.

Roy recently lost an additional 10-acre lease when it was sold for housing development, so he is “down to a skeleton crew of animals, but geese come back quickly.” Everyone is waiting for breakfast: the sheep, a handful of pigs, two dozen or so geese, and two guardian dogs, the excited eight-month-old puppy trying to get a 13-year-old Great Pyrenees to play with him. The 1920s-era buildings and Midcentury-style Airstream reflect Roy’s intentions: He wants this land to function more like it did 100 years ago. Roy learned a lot of what he knows from his grandparents, small-holder knowledge that skipped his parents’ generation. He is not nostalgic so much as appreciative, pragmatic, prepared, and clear-eyed about our context of increasingly rapid climate and ecosystem change.

It isn’t often people speak the way Roy does about our current moment. “It’s a privilege to be alive right now,” he says, quietly. “We must have courage and ramp up our adaptation.”

Roy is working as fast as he can to do just that, beginning with morning chores. He pops the lids from 5-gallon buckets and dumps sauerkraut-smelling vegetables into sprouted barley from a local brewery. “This is basically hog kimchi,” he laughs. “The veggies are grocery store waste that I pack really tightly into buckets, so they don’t spoil. They ferment and store for months and become digestible for the hogs. With the barley, the poly-to-Omega-3 fatty acid conversion happens in sprouting. The sugar has come out in the sweet beer liquid, and you’re left with high protein, fat, and fiber. “The health of the pigs improves dramatically,” Roy adds, as he wheelbarrows the kimchi-barley blend over the front pasture. “It cleans out their intestines. The lard ends up high in Omega-3s, too, closer to the nutrient profile of a wild animal.”

He steps over a low electric-fence wire and dumps the buckets into troughs, kneeling beside the spotted, friendly pigs to bestow scratches. All four are Berkshire-Kunekune-Duroc crosses from heritage stock, which Roy settled on after trying a bunch of different breeds. “You need the right pig in the right place,” he says, “a pig that will eat like a sheep will, grazing and browsing, but is not too rough on pasture. I tried some Landrace and Blue Butt that were not as good on pasture, but these pigs are, and they hold on to their calories.” They also provide fire control. 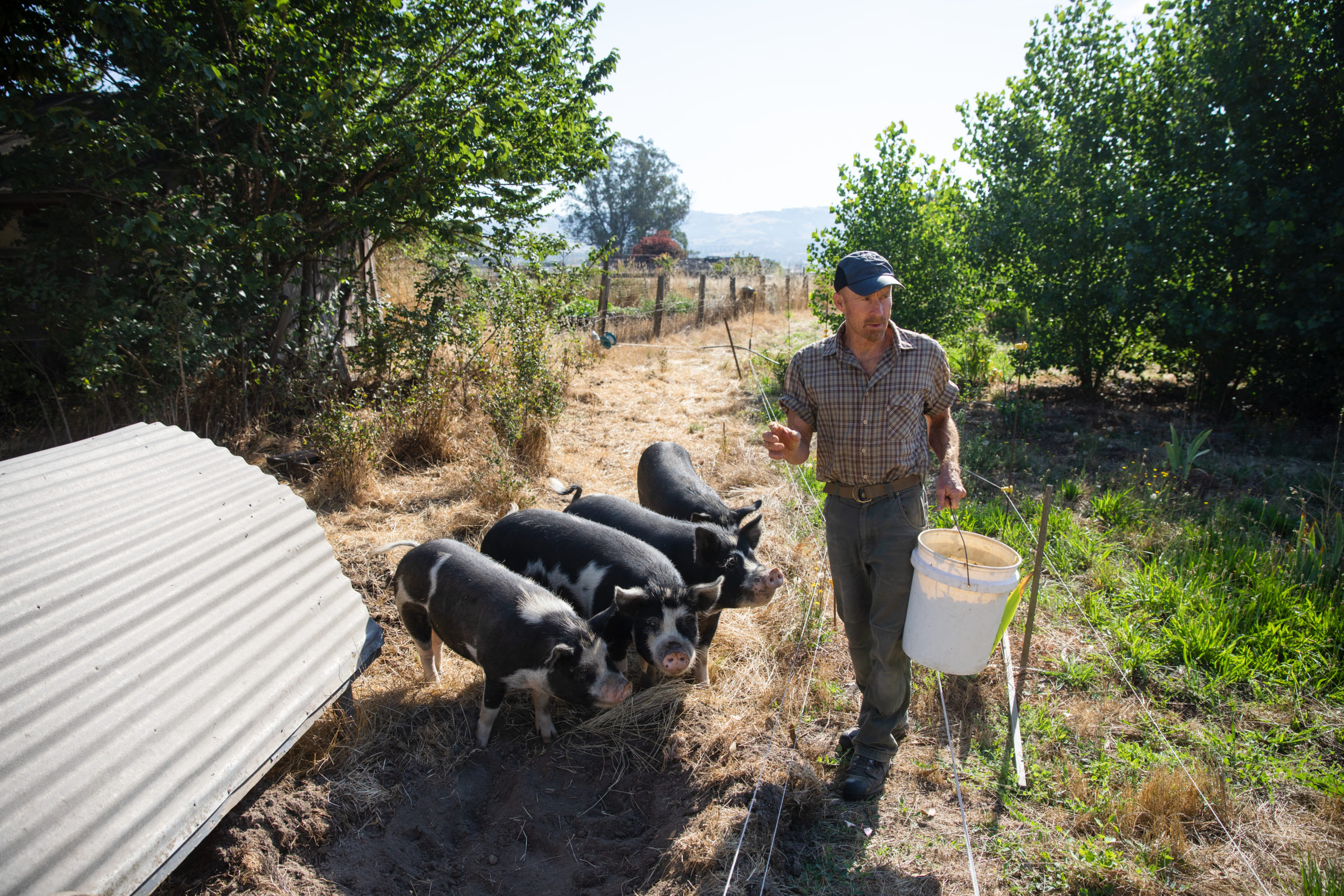 The front pasture was grazed twice this year. While green in the spring, its “first eating” was by sheep who want and need fresh green grass. Then, Roy hayed it down to low grass, and the pigs followed the sheep. “Only the pigs get external feed, so the sheep graze first.”

This is practically unheard of at a time when most folks in the American West are spending a great deal on hay. Only four pigs get external feed at this dry point in the year and years into a mega drought? How?

The small number of animals is part of it, but Roy’s management is too. “Here, February through June is our super narrow window of production,” he explains, forking his spring-mown hay into the sheep feeder. From late June through summer and fall, Roy’s animals distribute grass, water, manure, and integrate nutrients (like fallen goose feathers, all protein) across the property to maximize grass growth when the rains finally arrive.

Roy spends a month haying himself, by hand with a sickle bar mower and hand scythe. “There is no cash reward to it,” he says, leaning on his pitchfork. “That’s not the measure, really.” At this point in time, that would be approximately $3,000 of hay value vs. $6,000 of possible off-farm income. “That’s true for now,” he points out. “Hay could have a $10,000 value, and then the equation would be different.” Since the post-World War II period, he points out, “Labor has been expensive, and energy has been cheap. But that is going to change.” Roy is not referring to solar energy, of course, but to petroleum-based forms that fuel equipment and fertilizers. “The most complex systems will be the first to fail. We are already seeing that. We’ve exhausted the high-energy systems. Money is an input. Everything here has to be functional with virtually no cash input. Truly sustainable means ‘it can be done by the poor.’”

Roy seeds during the dry season, too, periodically scattering a wildflower/pasture seed mix. The pigs, sheep, and geese have mulched the pastures to within an inch or two of the ground, prepping a nutrient bed for mycorrhizal growth during wet periods. Roy’s goal is “uniform mulching within mycorrhizal reach,” he says. “Even a half-inch of rain explodes the mycorrhizal action in the ground.” The sheep have stomped in seeds and fertilized the ground so germination can explode as soon as it rains, too.

Two dozen American Buff geese, pale brown and white, trundle into the driveway beneath the high morning sun. “All of my fences can be breached,” Roy laughs, “even the outermost, but they all respect the property boundaries. I manage through husbandry, not force.” Geese are very effective grazers. “They are much more appropriate for many small farms than sheep,” Roy adds. Geese eat grass and grain, roots and shoots (blackberry included), stems, and seeds. The American Buff is a dual-purpose breed: their lighter feathers mean they dress out cleanly for processing and provide a nice source of down. In terms of Fibershed experimentation, Roy is exploring the use of goose down more than sheep or alpaca fiber. “Fiber animals can push the ecosystem,” he says. “This place is more like Crete than Ireland.”

Roy’s stocking rates are not only governed by acreage and feed availability, but by social health. He wants each group of animals to function well together, and finds they tend to naturally operate in groups of dozens, sometimes separating into smaller units at different times of year. “About ten percent of any given group seems to be a natural leader or otherwise behaviorally divergent,” Roy says.

Roy’s place is dotted with nine cool forest clusters. Inside their welcome shade, the temperature drops, and lizards, bees, birds, and nests abound. In one cluster, Roy uses small, shallow feeders as water troughs for the geese to slip into, supporting their need to slide in and out of water and cool off. The geese deposit manure in the water, creating a labor-free compost tea.

“Most compost tea is a high-energy input,” Roy says, emptying the water onto young trees. “You carry nutrients from a field and make them aqueous. With this, I can fertilize and water at the same time. Animals don’t come back to the same spot, and neither do these,” he adds, moving the now empty, shallow dish, which refills through an automatic trough valve. Roy has planted clusters rather than hedgerows because “Clusters introduce diversity into the arid grass plain and become little ecosystems themselves. It is all about the edges,” he says, with enthusiasm. “I want more edges, forest and meadow, meadow and pond, all for that biological-edge effect. The edges are where you find the most biological activity, insects, birds. All life begets life which begets more life.”

In Roy’s clusters, poplar, willow, leguminous trees, volunteer oak saplings, and mulberries work together in a primary-secondary canopy relationship. The poplar and willow will live for about twenty to thirty years and serve as “nursery trees,” nursing oaks that will live for hundreds of years. The short-lived primary trees bring in the birds, which bring in the acorns, so the forest naturally progresses.

“And it is really coming to life,” he says. “The birds are spreading now. Taller trees are bringing in owls and hawks, and they will help with the gophers. And the gophers know it,” he laughs. “They’ll take young trees out like beavers do. The trees bring in a natural hierarchy, and animals have tremendously complex thought processes going on. We may find gophers a nuisance, but their contribution and intelligence should not be ignored.” All of this creativity and labor serves Roy’s ultimate goal of “comprehensive food production,” which he defines as “the maximum availability of nutrients for all life.” It is not just land Roy seeks to restore, but our proper position in an ecosystem. “Humans spent most of the last three million years as a skimming agent,” he says. “The law of nature is that skimming animals can’t use their position at the top to take it all, because they would destroy it all. I am returning to a system in which the human side skims a portion vs. the opposite, which is what we’ve been doing recently – growing as many humans and animals as possible.” Roy’s goal is to bring ecosystem health and production levels up to a high enough baseline to enable humans to skim again, both through the growing of crops, and with the help of sheep, pigs, geese and other animals.

He admits he gets worn out and tired, doing all the labor he can on his own. In the next 10 years, he hopes to have other folks on site doing vegetable production, and thirty percent tree cover from the forest clusters — more trees, animals, and people. “I’m lucky. We’re lucky,” he says. “We get to try to improve what comes next. It is within the loss and destruction around us that we can find connection and meaning again. The very harshness of our predicament snaps us from our daily trance, and reveals this world and experience as beautiful. To live in such times is to witness life at its most intense, but this also fills each of our lives with meaning, as our daily work will soon matter again.”